Living in the Age of Airplanes: A Review 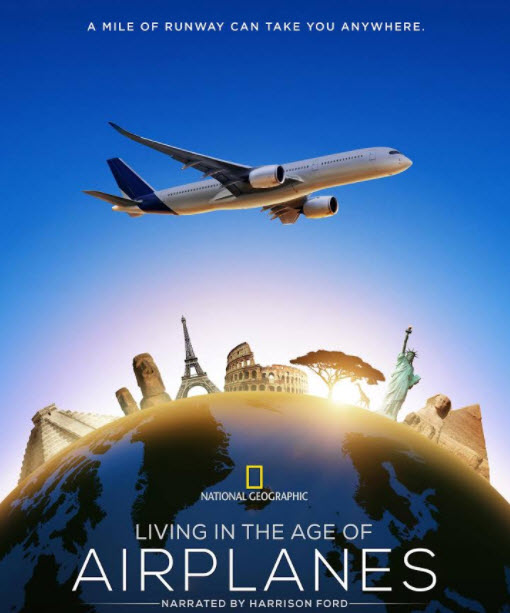 Living in the Age of Airplanes is a 45-minute National Geographic documentary about the last century and how humanity has gone from the first flight in 1920 to having air travel almost perfected in less than 100 years. This documentary is narrated by Harrison Ford and the music is by James Horner who passed away in 2015. This film took six years to make, was shot in 95 locations, 18 countries, 7 continents, and not once was their one camera ever dropped.

Ford begins the documentary by pointing out that the average traveler is often bogged down by the process of flying: arriving early, the whole baggage ordeal, tickets, security, waiting, etc. so we end up taking the fact that we can get to just about anywhere in the world for granted. Journeys that used to take our ancestors literal lifetimes take us just a couple of hours. Ford points out how amazing that is and invites the viewer to forget everything we think we know about airplanes and see them as if for the first time.

After a fascinating and necessary look at history, the documentary shows breathtaking imagery of mountains, landscapes, and skyscapes which are truly indescribably beautiful. Those images and the way they flow seamlessly into one another gives weight to the talent of director Brian J. Terwilliger.

Ford proclaims that airports are portals to the world. Airplanes have made it possible for everywhere to be within walking distance. Aside from the obvious cost, time, and interest, the point is made that if we wanted we could visit anywhere we wanted to. The option is now there, compared to a mere 100+ years ago, the only options we had were trains, boats, cars, and walking. Even those options limited humanity to their own country.

The documentary continues to emphasize the feeling of connection that airplanes bring by pointing out that no matter how remote a place is, we can still get there. Even if the islands are too small to have a runway, the seaplane makes it possible to exit and leave the country. Even getting to the South Pole, arguably the most remote place on the Earth, is possible to get to (minimum of three flights–all weather dependent so it might take as many as 11 nights camping outside in Antarctica–but still possible).

The theme of connection persists when Ford explains that it’s not just one way. People don’t just go to places. Places come to people. The biggest example was flowers. From when the flowers are cut in Kenya to when they are delivered to a remote house in Alaska is three days. The camera pans and the shot shows water from Fiji, coffee from Columbia, a scarf from Italy…you get the idea. “Everywhere we go, we find pieces of everywhere else,” Terwilliger said.

In closing, Ford suggests that we as travelers need to see the perspective. He said that we sit back, enjoy the ride, and find ways to the pass the time without realizing the speed we are going in the air is the fastest we may ever go in our lives.

This documentary was interesting, informative, had a great message, and a beautiful score. If you get a chance to pick up this documentary, be sure to check out the special features, deleted scenes, and behind the scenes additions. Those pieces add at least another hour to the viewing experience.